It was the second year in a row that a student of Deese’s program won North Carolina’s SkillsUSA competition. Tucker McAbee won the 2021 state contest. He was also the first student to earn a Sawblade Certificate when Deese introduced the WCA certification into his program two years ago.

“Tucker is set to begin his career in cabinetmaking at Mountain Showcase, a local shop in January,” Deese said. “He is a senior who will graduate a semester early so that he can get a head start on his career. His competency and the fact that the Sawblade certification showcases his knowledge and abilities, helped him to secure a great job with a higher starting salary than the regular Joe off of the street.”

Beal and McAbee may be the most high-profile students to hone the craft of woodworking under Deese’s tutelage so far. But many other students are benefitting as well.

About 60 students of West Henderson’s 1,200 student body enroll in the four woodworking courses offered each semester. In addition to Woodworking 1 and 2, West Henderson began offering a Woodworking 3 course this fall and also offers an advanced studies course. “Advanced students learn how to plan their project, develop a budget, create a cut list, procure materials and build it,” Deese said. 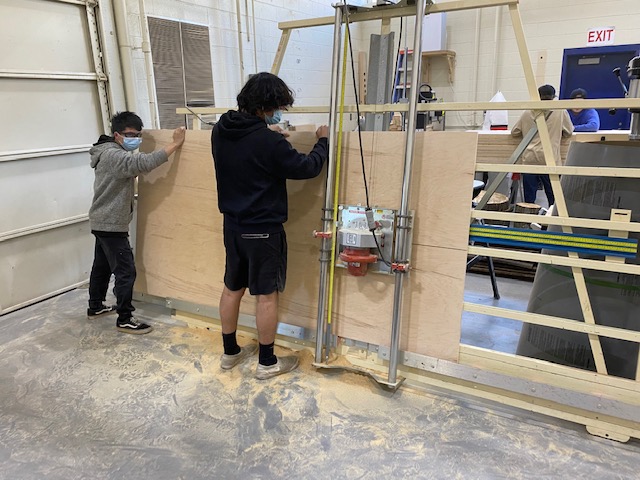 “We actually have a wait list because there are far more kids who want to be in the program than we have space for,” Deese said, noting that his son is among students waiting their turn. “Kids like to do things with their hands. The number one thing that I do is to establish a relationship with these kids. Making them see that woodworking can be fun and that they make something to take home helps make the program even more popular with them.”

To boost awareness of his woodworking program, Deese markets to eighth graders who will feed into West Henderson High School. “Every year we do a recruitment video and put it online to send down to the middle school. This year I did kind of a used car salesman thing that my son helped me film. We got a lot of feedback from that. A lot of kids wanted to sign up for the program.”

Deese, who once ran his own custom cabinet company, is in his third year as a woodworking instructor at West Henderson, following two years of teaching carpentry at a different high school. West Henderson joined the WCA in 2020. Deese soon after completed the WCA’s online training program to become an Accredited Skill Evaluator (ASE). This allows him to evaluate his students’ ability to meet the WCA Skill Standards, which were vetted by industry professionals.

“I think North Carolina is putting a lot of focus on CTE training because people are finally acknowledging that not every kid needs to go to college and incur $120,000 worth of debt,” Deese said. “Up until three years ago, all of the high schools in Henderson County offered carpentry and only one had a cabinetmaking program. Now all four schools in the county have gone to woodworking and all six traditional high schools in nearby Buncombe County have switched from carpentry to woodworking as well.

“The WCA Skill Standards are so wide and varied,” Deese added. “The list of tools that you can get certified on is immense. I start out teaching students how to measure and how to lay out things. Then they progress to actual hands on at different levels beginning with safely using the tool when I set it up for them. After that, they learn to properly set up and operate a tool to yield a successful result. The standards take so many variables into account and make it easier for me to evaluate how well each student performs on a given operation.

“Because the WCA program is flexible, I can plan my projects in conjunction with them as well. I know that if we are talking about stationary surfacing machines like the jointer and the planer for making a box out of rough sawn material. I can give my students a little bit of a presentation in class and then go in the shop and they can start putting their hands on it. I’m not locked into I have to do this, then this, then this. A lot of programs are very structured and rigid to how they work. But with WCA I can cover things in the order that we are doing something to dovetail with a particular project.

Ten Woodworking 2 students earned their Sawblade Certificates last spring. Deese said he expects a similar number will do so during the current fall semester.

“The Sawblade Certificate is in and of itself great. It shows that the students are learning things so that they can work on their own,” Deese said. “We want to make sure that we get industry partners that recognize this. I’ve been reaching out to area cabinet shops and Mountain Showcase was the first one to be very interested in our program.” 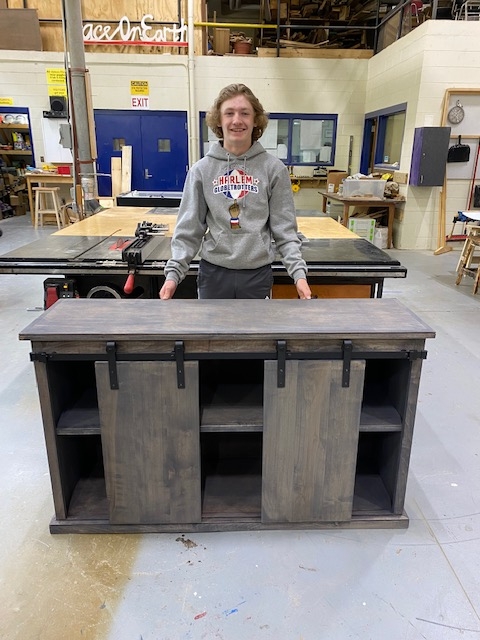 Junior Bradley Thompson poses with the entertaomment center he made in West Henderson High School’s woodshop.

“Using the WCA Sawblade Certificate program, I can teach a student to use all of these different tools and he can go out and work in a cabinet shop or on a construction jobsite,” Deese added. “That makes them much more hirable because they didn’t learn how to use a lathe or even how to properly set up a table saw in carpentry class.”

That said, Deese allowed that most of his students will probably not pursue a career in the trades. “It’s still something that they can use. If they need to make something on their own or even just hang a picture, it’s a valuable skill that they can carry with them whether they make a living out of it or not.”