Jeff White went to work on the assembly line. Then the speed-ups began. The overseer urged White and his fellow laborers to work faster and faster – for no extra pay.
White couldn’t have been happier.
A high school social studies teacher at Illiana Christian School in Lansing, Ill., just south of Chicago, White was “working the line” at the Tsongas Industrial History Center, learning in a visceral way about the conditions in Lowell’s textile mills in the 1800s.
The exercise was part of a weeklong National Endowment for the Humanities (NEH) summer teacher institute, “Social Movements and Reform in Industrializing America: The Lowell Experience.” 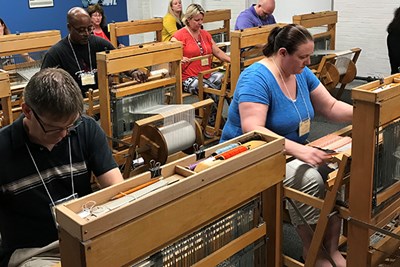 Now, when White teaches American history, he will bring photos and stories from his week in Lowell and a more nuanced understanding of industrial technology and social history to his students, he says. They already read Upton Sinclair’s “The Jungle,” which portrays the terrible conditions for immigrants working in Chicago’s stockyards and meatpacking plants in the early 1900s. Now he will also assign Katherine Paterson’s “Lyddie,” about a farm girl who comes to work in the Lowell textile mills in the early 1800s.

“So many of my students have never been east to Boston or New England,” he says. “In Chicago, industrialization doesn’t hit until the 1850s, 1860s. Chicago is built – and then it explodes. By that time, New England had been settled for a couple of centuries. I want to compare and contrast.”
White was one of 36 history, English, science and elementary school teachers from around the country who spent a week in late June studying 19th-century American history, thanks to a $167,000 NEH grant that covers their tuition and pays them a stipend to defray the cost of housing, meals and travel. Another 36 teachers will come later this month. 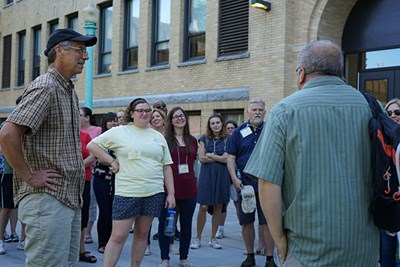 The program was created by the Tsongas Industrial History Center, an education partnership between UMass Lowell’s College of Education and the Lowell National Historical Park that also hosts about 45,000 schoolchildren each year through field trips.

The summer institute is now in its 11th year and has trained more than 1,000 teachers from schools around the country, says Sheila Kirschbaum, the center’s director and a College of Education staff member. Those teachers, in turn, have impacted thousands of students in classrooms across the country.
“They go back to Montana, Kansas, California and New Jersey and they’re teaching like they’ve never taught before,” Kirschbaum says.
This year, the institute’s theme is social and reform movements: the mill girls’ early walkouts in support of a shorter workweek, their opposition to slavery and their push to enlarge women’s “sphere;” the anti-immigrant, anti-Catholic “Know-Nothings;” and the Transcendentalists, such as Ralph Waldo Emerson and Henry David Thoreau, who idealized nature and wrote warily of Lowell, the “city of spindles … which sends its cotton cloth round the globe.” 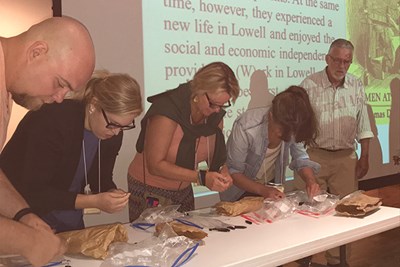 Photo by Sheila Kirschbaum
Teachers assemble ballpoint pens — a lesson they can do with their students — as History Prof. Robert Forrant looks on.

While the program is based in Lowell, the teachers travel to the birthplace of Transcendentalism in Concord and visit Old Sturbridge Village in central Massachusetts to understand rural life at the time industrialization began in earnest.

They also hear lecturers from professors at UMass Lowell, Brown University and MIT, get walking tours from local historians, see historical performances and take a boat ride up Lowell’s first canal to learn about its construction and the Irish immigrants who built it.
The teachers eat a boardinghouse dinner at the Boott Cotton Mills Museum, part of the national park. The meal is similar to those provided to Lowell’s mill girls in the 1830s by the boardinghouse keepers. While eating, they discuss how to use food to teach history. Two days later, they cook lunch on a farmhouse hearth at Old Sturbridge Village, a living history museum, to understand the life those girls were leaving behind. 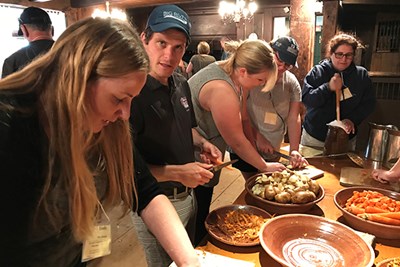 Photo by Sheila Kirschbaum
Teachers make a meal from scratch and cook on a hearth at Old Sturbridge Village.

They card and spin wool and weave a small square of cotton fabric on a manual loom – and compare that to the speed and clatter of production in the textile mills. They learn how to build canal systems and test the efficiency of waterwheels, and they talk about “green” engineering and the ecological costs of diverting river water.

Throughout the week, they learn how to translate early American history into hands-on lessons that will leave a lasting impression on their students in elementary, middle and high school.

This program is very well-constructed,” says Paul Horton, a high school history teacher at the University of Chicago Laboratory Schools. “It’s a very intentional balance of content and experience – the hands-on stuff you get at the museums, the walking tours and the living history at Old Sturbridge Village.” 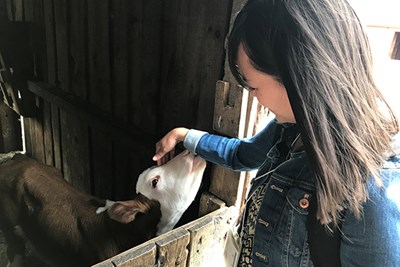 Amber Robins, an English teacher at Roxana High School in the St. Louis metropolitan area, was fired up by Assoc. Prof. of English Bridget Marshall’s lecture on writings by the mill girls in “The Lowell Offering,” especially the mill girls’ response to the Transcendentalists’ critique of industrialization.

“Professor Marshall got me focused on the writing of the mill girls. Some of it is so beautiful. When I teach Thoreau from now on, I’m going to include that,” Robins says. “Everyone has been so knowledgeable, it’s blown me away.”
The center debuted the program in 2006, training two or three cohorts of teachers each summer, some for graduate credit through UML’s Division of Online and Continuing Education.
Four years ago, the center got a different NEH grant to put many of the lectures, videos, photos, lesson plans and other resources online for teachers who are unable to attend in person, Kirschbaum says. That’s crucial, since far more teachers apply than the program can accommodate; 328 applied for only 72 places this year.