The former BMW Manufacturing president admitted that most parents gathered in BMW’s Zentrum to watch daughters and sons sign on to an apprenticeship with the manufacturer probably weren’t thrilled with their children’s gaming habits. He went on to describe a Plant Spartanburg beyond his tenure, one built around virtual reality, the internet of things, drone inspections and 3D printers able to make replacement parts onsite in lieu of shipping them in from afar with a six-week wait.

“You work together with the robots,” he told the high school seniors at the August event. “Hand in hand, day by day … the robot talks to you. You talk to the robot.”

This is how the U.S. will stay competitive on the global stage, he said, during a time when some industry leaders advise moving BMW’s U.S. facilities to Mexico, Nicaragua or China.

“No! This is completely the wrong strategy,” he answered, adding that BMW is one of the largest global exporters in vehicles because it sells to China, which, in his words, is much more fun than the other way around. “The jobs are here, the education is here, the people are here.”

People like the ninth graders in Teresa Curvin’s advanced technology for design class, who were dismantling household objects like Christmas lights and researching what goes into the making of them on a Friday afternoon in early September.

These students are members of Fountain Inn High School’s inaugural class and pioneers of the school’s sparkling new Automation and Engineering Institute, the first in Greenville County.

Shared career centers and vocational tracks have long been a part of high school curriculum.

Rows of lathes and mills and a Kuka robotic arm à la Plant Spartanburg are something unique to the $84 million school.

Principal Maureen Tiller said the institute is a sprocket in the county’s shift away from segregating ‘career-focused’ students and ‘college-bound’ students, the technical and the academic.

“For years, it used to be that students would get placed into a track and almost feel like they were stuck there,” she told GSA Business Report. “So, they would either have to select college-bound or career-bound.”

Sometimes even before knowing much about what either option entailed.

“They were pretty much ‘locked in’ until they graduated,” she said.

With the institute’s presence on campus, ninth graders can take Mechatronics I as an elective alongside their band and computer science courses. They don’t have to wait until career center opportunities open up in 11thgrade – classes that often take students half a day away from their primary campus and are not always accessible to those with a hefty AP or honors load.

“We do have something special with the Institute of Automation and Engineering, which is like a smaller learning community where students can not only take classes in academics and the arts and the languages, but also focus on areas of automation and engineering that will really support advanced manufacturing.”

Career ‘pathways’ are a more flexible replacement to the ‘tracks’ of yore, she said.

Tracks don’t always cross, and it’s hard to go from one parallel line to another. Pathways allow students to explore the junctions, crossovers and forks of various disciplines and careers. Especially now that advanced manufacturing needs assistance from innovative minds now more than ever.

The pathways were forged by the interests of upcoming students and an advisory board of local industries including ZF Transmissions, ABB and Bosch, joined by the Fountain Inn Chamber, Greenville Technical College and other groups.

In February, ZF announced plans to invest $200 million in its Gray Court plant by 2023 with the expectation to add 500 jobs to its 2,200-person workforce as it ramps up the production of an eight-speed automatic transmission able to be used in plug-in hybrid vehicles and commercial vehicles.

“We’re looking to attract some high school students here that have the top-tier talent that we’re looking for and to bring them to ZF,” Consquela Thomas, human resources specialist at the BMW supplier, said in a statement on the first day of school in Fountain Inn.

CNC machinery will enter the scene eventually at Fountain Inn High, but these industries wanted students to learn the basics first, according to Tiller, alongside an emphasis on best safety practices. 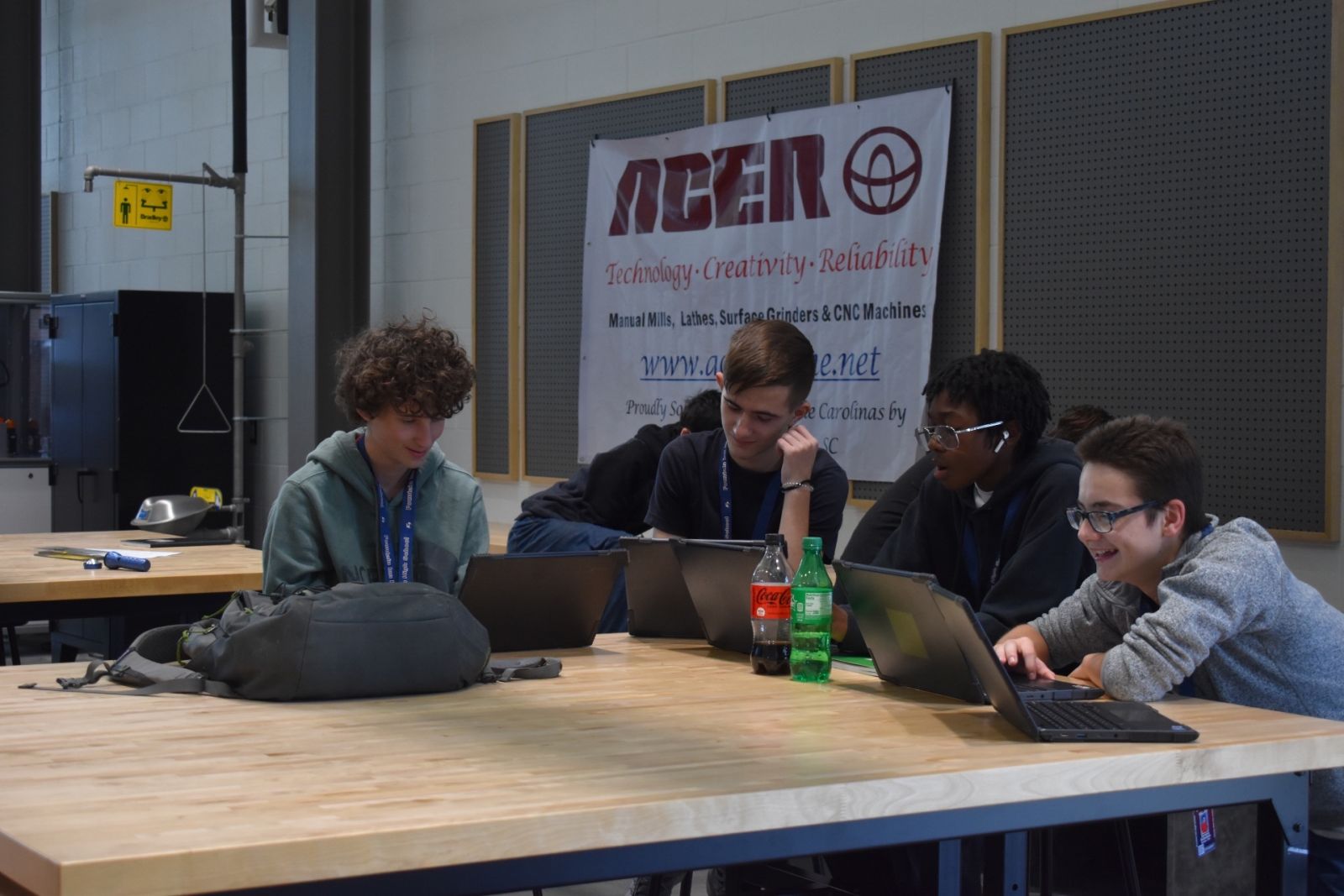 Only the ninth grade class is at the Automation and Engineering Institute this year with introductory classes that hone in on safety practices and concepts. (Photo/Molly Hulsey)

“They were seeing a group come into the workforce that they were training on CNC machinery but didn’t understand the background of why they were coding the machines that way,” she said. “For example, you can know how to use a calculator, but unless you understand the algorithms behind why you’re doing that, it’s very difficult to use it correctly.”

The school will continue to receive feedback on local industry’s workforce needs through its advisory force. Especially as Tiller and the Greenville County School District expect that Fountain Inn’s institute is the first of more to come in the county.

Once the inaugural class reaches tenth grade – only the ninth grade is at the school now – students will have the option to take complementary classes at the career center, as well as dual enrollment courses at Greenville Tech. These pathways can feed into technical certification and undergraduate and graduate courses at Clemson University and University of South Carolina, among others.

The institute’s courses also dovetail with apprenticeships and internship opportunities at local industries, like those introduced by Flor in August before his retirement at BMW.

“The pathway doesn’t just stop at the 12th grade,” said Tiller. “It goes directly into Grades 13 and 14, and there’s an alignment all the way up. Those courses that are laid out for them go all the way through tech school. And they could go straight to tech school or they could go straight into a four-year degree. It’s college and career ready. You don’t have to choose one over the other.”