The Alabama Board of Education elected new officers and approved a vendor to create the next round of standardized tests for Alabama’s K-12 students at their July board meeting on Tuesday in Montgomery.

Gov. Kay Ivey, as President of the board due to her position, presided over the meeting. McCarty will preside over meetings when Ivey is absent.

McCarty and Newman were each elected with seven votes, with one board member, Ella Bell, D-Montgomery, abstaining from both votes.

McCarty, representing District 6, was first elected to the board in 2014 and has no opponent in the 2018 general election. She is an economics professor at Jacksonville State University.

Newman, a former Lamar County superintendent, represents District 7, covering parts of northwest and central Alabama, and is in the middle of his second term on the board, first elected in 2010. He previously served as Vice President of the Alabama Board of Education in 2015.

Ella Bell explained the reason she abstained from voting for officers is because both McCarty and Newman received election campaign donations from the Business Council of Alabama.

“I have noticed the divisiveness that the BCA has reaped over this board of education,” Ella Bell said. “For that reason, and for that reason alone, I abstained.”

Ella Bell then wished “very good blessings for the 2018-2019 school year” to both McCarty and Newman.

Former Board Vice President Stephanie Bell, R-Montgomery, was not present at Tuesday’s meeting.

At the work session that followed the official meeting, Ella Bell congratulated McCarty and stated she plans to change her vote to make it unanimous at the August board meeting.

McCarty said she is very honored to be chosen to serve in the position and “to help us all work together to improve education for our students.”

As expected, state superintendent Eric Mackey recommended board members authorize a contract with Data Recognition Corporation to create a new system of tests to replace the ACT Aspire, which the board dropped in June of 2017 after four years of use.

Before the vote, board member Mary Scott Hunter, R-Huntsville, said it is important to decide on and stay with one set of tests for students. Many didn’t like the results of the ACT Aspire, she said, because it showed Alabama students weren’t on track to do well on the ACT college entrance exam.

Hunter said she hopes the education community will treat the new assessments differently.

We have to have the backbone and the intestinal fortitude to stick with our test,” Hunter said, “even if our results aren’t what we want to see.”

Board member Yvette Richardson, D-Birmingham, said she is encouraged that Alabama educators will help align the new tests to Alabama’s courses of study. “I think it’s something that we’ll be proud of in the long run,” Richardson said.

After the meeting, Ivey commented on the board’s choice of DRC. “This firm is the most qualified,” Ivey said. “They’re going to involve teachers in the development of these tests. That’s important. So, this is a good decision by the board.”

In other business, the board voted unanimously to fill four vacancies on the Alabama Public Charter School Commission. In previous years, some board members had pushed back against what they believed was an appointed body forced on them by state lawmakers over which board members had no authority.

Three current members of the Commission, Chad Fincher, Lisa Williams, and Ibrahiim Lee, were appointed to another term, and newcomer Peggy Duck Branch was also approved. Commission member Terri Tomlinson did not seek reappointment. The new appointments are for two-year terms, which technically began in June.

Also, during the meeting, board members approved Chilton County Superintendent Tommy Glasscock as Assistant Superintendent of Career and Technical Education at a salary of $145,000. Glasscock will start in that position in October. The position over that department was formerly a Deputy Superintendent position, but has been filled by an interim since Philip Cleveland resigned in February 2017. 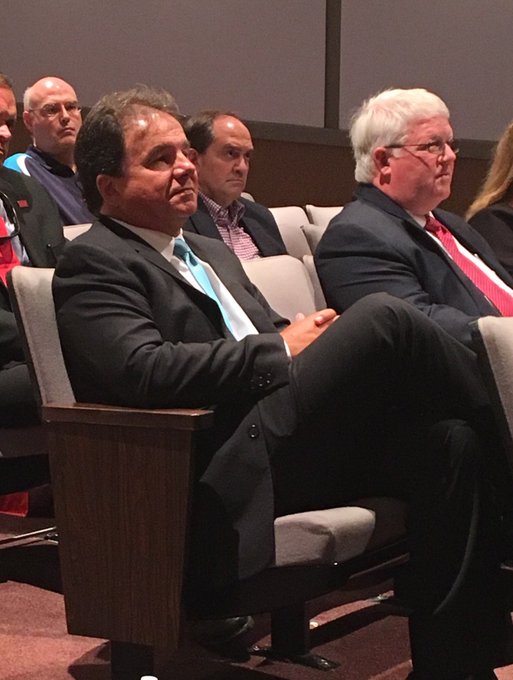 SuperDega@DegaSuper
S/o to Tommy Glasscock new Career Tech Director
Twitter Ads info and privacy
After the meeting, Ivey, who has been highly visible at board of education meetings since becoming Governor in April of 2017, responded to questions about the change in tone of the board meetings, which under former Superintendent Michael Sentance had been tension-filled and fraught with disagreement between the superintendent and the board.

Ivey said she hopes a positive change has taken place. “Education is a high priority with me,” she said. “I believe that leadership is important.”

I began my career as a teacher. Not many governors have done that,” Ivey continued. “I have a high respect for what goes on in the education process and the people who do it and I’m proud to be a part of it.”